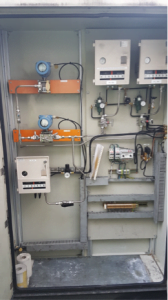 It all started with the installation of two new nitrogen compressors and culminated inan entirely new control philosophy for the Linde Gas Botlek tank park. CoNet played a very important role in the transformation towards a reliable back-up installation for the pipeline clients. CoNet made sure that the maintenance aspect was expressly included in the design of both installation and hardware. The newly installed instrumentation boxes for instance, have been set up efficiently and well-arranged, which of course makes maintenance and verification of the installation a lot easier.

The Linde Gas company produces oxygen, nitrogen and other cryogenic gasses. Welding, cooling, freezing, heating, cleaning, lab analyses… the industrial gasses that Linde Gas supplies are used all over the world. Just in the Botlek many industrial clients are hooked up to Linde Gas via direct pipelines. Worldwide the company employs 80.000 people in 100 countries. The originally German Linde AG recently merged with its American competitor Praxair; since that merger the company is now the largest producer of industrial and medical gasses globally. 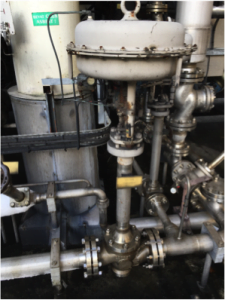 Wim Klerk has worked for Linde Gas for thirty years. Since 2000 his role is project manager in the Opportunity & Product Development department. Part of his tasks in the Linde Regio Europe South (RES) is overseeing the construction of new gas plants and the upgrading of existing sites. “Each project presents its own challenges”, he tells us. “That certainly is true for this Botlek project. The main mission was implementing a new control system. We happily let industrial automation specialist CoNet do that job for us. Conet’s project team, with Mathieu Smit, Maurice Mittelmeijer, René Oosting and Danny Romein, has a lot of know-how and experience in the field of PCS7 and process instrumentation. CoNet also handled a couple of additional chores, such as the installation of positioners on the control fixtures.”

The project involved, amongst other things, disconnecting the air splitterplant and revamping the tank park. Wim: “This meant disentangling the current control system while building a new control system at the same time. In order to do this, wecontrolled the plant using Provox by Emmerson. CoNet took care of migration towards Siemens PCS7. It sounds easy enough after the fact, but it really was a big effort. In the end, we handled almost everything together with CoNet and Jac. de Vries Elektrotechniek’s team (headed by Ronald Wiering).
A new 26 by 36-foot shelter containing everything was built on site: network, low voltage provision and control system. Really everything has been thought of. Even in case of a power outage there is no problem. In that case the power necessary for the back-up installation is supplied by a new and powerful generator. All cables and conduits were also replaced by new ones and four new instrument boxeswere installed on the site. CoNet made sure that the design of these boxes is very well arranged and transparent, which makes this installation’s maintenance much easier. On top of that, an entirely new control room has been installed; it contains new monitors, camera surveillance and more.” 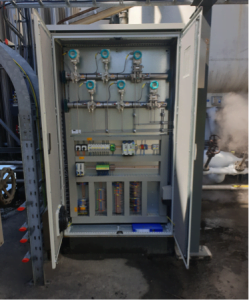 “We were commissioned to fully modernize and automate the back-up installation”, Cornet’s MathieuSmit adds. “An important detail was for the back-up, when necessary, will start up automatically. We worked together with Linde Gas to draw up an action plan dealing with necessary instrumentation, cabling and positioners and the migration towards PCS 7. While we charted the entire production process and went to work on implementing the new PCS7 control system, the project’s scope expanded continuously. We had to put in a lot of thinking and installing (like replacing all of the regulatory valve controls, sensors, new feed distributors, new instrumentation boxes, etc.) in order to successfully complete this project.”

“Now the new transmitters feature easy maintenance, because they are placed in an organized manner and sorted per production unit in one box. Specific calibration and test reports were delivered with every newly supplied transmitter. Due to BRZO-regulations (Besluit Risico Zware Ongevallen = Decree on the Risk of Severe Accidents) for this installation, a LOD-document (Line Of Defense) was drafted. Testing and documenting the safety devices during operation was the last step that we concluded together with the principal.”

“CoNet and Jac. de Vries were cooperating perfectly”, Wim Klerk concludes. “We are very happy with the result. I’ve known these guys for a long time, I know how they operate and trusted them fully. But, as we mentioned before, it was a tough process. We kept encountering new things. What didn’t make things easier, is the loss of knowledge over the years. A lot of that knowledge sits inside the heads of employees now retired. So you could say we had to reinvent the wheel. But the result is very satisfactory. We are especially happy about the supply and set up of the instrumentation boxes. We are fully ready for the future again.”